Enoch and the Watchers details a number of carvings as constellation charts, but the two most significant are included below. There are two keys to understanding these carvings. The first is the sunrise on the vernal equinox in the Southern Hemisphere, circa 10,300 BCE, +/-300 yrs. At this time and place, the predominant celestial body on the horizon is the Galactic Core, in which the Galactic Core and the sun are in conjunction – seen as one! The second key is the supernova of SgrA*, which would have been observed by the Watchers at the tip of Scorpius, next to the Galactic Core. This supernova created a plume of dust first documented at Tihuanacu, and later to be memorialized with the famous Eye of Horus necklace.  The cover art of Enoch and the Watchers represents the Galactic core as the “eye” with the constellation Aquila to the left, and the constellation Serpens to the right. The Egyptians and others recorded Serpens under many different names and myths, such as Hathor, Apep, and Seth. The primeval Watchers recorded Serpens as a five-humped snake with a coiled tail. The coil was later transformed to the Scorpius Constellation, with the head of Scorpius leading into the Serpens Constellation of the modern era. With only a star constellation left behind to record its path, the Great Celestial Serpent was that plume of dust created by cosmic rays shooting across the galaxy.

For those who may be unwilling to accept that the carvings of Tihuanacu are that ancient, I challenge you to read Appendix IV: In Defense of Posnansky’s Dating. This section dissects and disarms the few arguments that critics of Posnansky have offered, and summarizes all the supporting archeological and geological evidence that is generally ignored by critics. 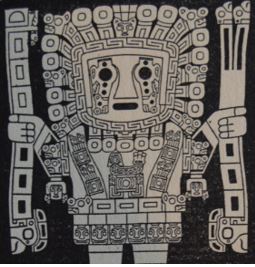 The two staff of Viracocha cannot be understood without reference to the mythology of Mesopotamia and Egypt.

“Šarur made the storm-wind rise to heaven, scattering the people…its venom alone destroyed the townspeople. The destructive mace set fire to the mountains, the murderous weapon smashed skulls with its painful teeth, the club that tears out entrails gnashed its teeth.”[6]

The commonality of these myths, and the celestial location assigned to them by the ancients (in the stinger of Scorpius) suggests the assigned stars should be considered as the head of the staff of Viracocha.

When viewed from the southern hemisphere, using these two regions of the Scorpius Constellation as the staff heads provides a pathway for developing an image of the Viracocha.  The staff heads appear at the intersection of two major celestial divides: The Galactic Equator and the Celestial Equator.  The Galactic Equator is the foundation of the system of measures (latitude and longitude) by which space is measured from the Galactic Center, as measured by radio source Sgr A*. The Galactic Equator is 0° and the poles +/- 90°, with the equator running through the center of Milky Way. The Celestial Equator is a projection of the earth’s equator into space. Due to the Earth’s axial tilt, the celestial equator is inclined by an approximate 23.4° with respect to the ecliptic plane. (See Figure 114.) 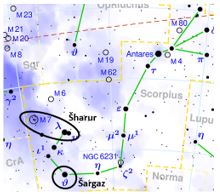 The staff originating at Sharur runs parallel to the Galactic Equator and through Sgr A*, where the right hand of the Viracocha appears to hold onto that staff. The point at which Galactic Equator runs through the region of Sgr A* is the same point at which the plane of the Ecliptic intersects with the Galactic Equator.   The staff originating at Sargas runs parallel to the Celestial Equator, and the left hand of Viracocha would be found at the position of the star Iota Sagittarii (Iota Sgr, ι Sagittarii, ι Sgr). (See Figure 115.) 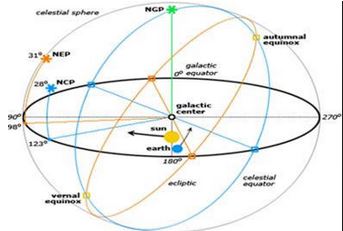 With the discovery of these two components of the Viracocha image, and the identification of their stellar components, one can speculate the following:

This hypothesis is then validated by looking at yet other images found on the Viracocha. Below the aureole, in the Viracocha image, there is a five-piece necklace. Two images display necklaces having four condor heads and a star, and the one necklace has five stars. This interpretation suggests the five pieces are from left to right: NGC6595, Messier Object 22,φ Sgr (Nanto), Messier Object 54, and NGC6723.(See  Figure 115.)

The bottom of the Viracocha’s robe varies greatly over time, from four snake to six snake. The six heads would represent from left to right, starting at the southern end of the Aquila (Eagle) Constellation: 1) Deneb el Okab (ζAql17, Aql), 2) Altair (α Aql -53Aql), 3) η Aql, η Aquilae 4) θ Aql-65 Aql. 5)  Albali (ε Aqr, ε Aquarii) 6) Messier Object 30. Just above the bottom of the robe appears two puma heads at the ends of a snake torso, representing dark nebula. What is not seen is that to the right and left of the robe are the Serpens and Aquarius Constellations. Both of these, in myth, are associated with the dark cloud that brought the Great Deluge, and one can speculate that at this time, that nebula ran through this space.

The various versions of the staff generally incorporate the artistic imagery applied to the crown and aureole, with the ends of the staff being marked by either snake or condor heads. Interestingly, only two instances of the staff uses a puma head. One is found being held by the Viracocha on the Sun Idol, and another by a Winged-Bird-Man – both on older idols at Tihuanacu. In an older rendition of the staff, the staff is clearly presented as a serpent with a winding body, and several staffs use the same imagery found in the crown to represent the serpent ‘markings.’  The conclusion is that the staff is a specialized presentation of the cloud nebula, but it is being controlled by the holder.  The staff, historically, is a weapon- both defensive and offensive.  This lends the interpretation to suggesting the staff is a cloud nebula that has struck earth. 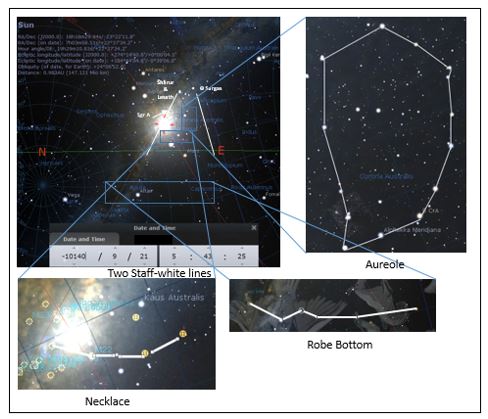 Two Staffs, Crown, Necklace, Robe Bottom and Left Hand of Viracocha representing a view of the Galactic Core circa 10,140 BCE on the vernal equinox, with the Sun in conjunction with the core, as seen from the current location of Tihuanacu.[10]

from Uruk seal(left) from Pachamama Idol(right), [1]  where Pachamama image has wings, paws and curved tail.

El Fraile (left) Pachamama (right)[3] The Sgr A* Supernova, initially seen on left and carved on el fraile Idol, was later stylized on the pachamama idol 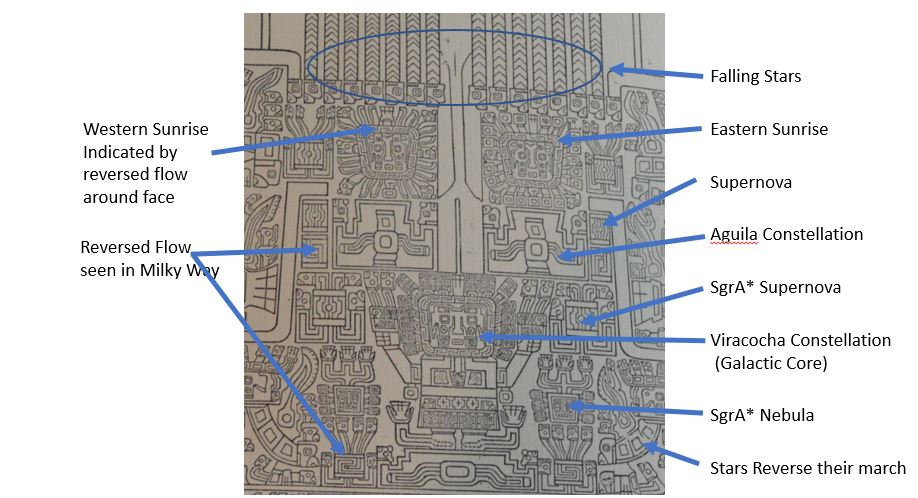 Figure 128: Pachamama Idol –Scorpius Next to Galactic Core with Aquila Constellation as supernova cluster above Scorpius, with dualistic presentation of geo-polar flip

Nearly all the representations of Viracocha, or a celestial deity such as Sirius, present the central character with an aureole of stars, clusters and nebula. In the case of Pachamama, the head of the idol is missing any of the standard aureole embellishments. Something different appears, which is a sixteen-star necklace, closely resembling the number of luminaries in the aureole.  This necklace is seen in Figure 129.

This variance in style is made clear when one understands that the view of the Galactic Center changes at the northern latitudes, from a vertical stance of the eye, to a horizontal stance. With this change in perspective due to a 180°excursion, the Aurora Australis appears underneath the Galactic Center (rather than at the side) as it rises above the horizon, thus representing a necklace rather than a crown.

The necklace worn by the Pachamama Idol (Figure 129) has two pendants suspended from it, one above the other. (Figure 130) The upper pendant has a spiral direction of the Milky Way suggesting this idol was created while the Sun was rising in the West, while previously it has risen in the east. The upper pendant clearly displays, in size and order, the three stars of Orion’s Belt as it would be seen in a geographical polar reversal. The belt is preceded during sunrise by the five stars that usually represent the upper torso of Orion as envisioned by the Babylonians, with the brighter stars on the outer edge represented by the condor head. On the left and right, one finds more symbols not seen elsewhere, which may very well represent the very well-known nebula of Orion: Flame, Horsehead and “the Great” nebula. The ‘old’ view of Orion in the lower amulet would seem to be represented by the four major stars: Sirius, Rigel, Betelgeuse and Procyon as condor heads, and Orion’s belt in the crown. Rising in the east and viewed from the south, Orion’s belt would have been seen as a horizontal rather than vertical alignment. Together, these icons suggest, as does the architectural history of the Kalasasaya Temple, that the early inhabitants of Tihuanacu experienced a polar flip long prior to the Great Deluge of 9500 BCE, and that cataclysm was associated with the region of the stars now known as Scorpius. The timing for this cataclysm would be the last of the three world-destroying floods which preceded the Great Deluge of Noah. (Plato, Mesoamerican, Sumerian and Egyptian creation myth all relate there were three cataclysmic floods before the Great Deluge. See Chapter X)

[1]       This icon may represent the Basmu Serpent rather than a scorpion man.

[3]       Tanen is translated to be “Adam”- the first man of Hebrew tradition, by Allen Austin, The Messianic Temple, self-published, 2011, page 56. Reference to The Winged One found in Eve A. E. Reymond, The Mythical Origin of the Egyptian Temple, Manchester University Press, 1969, page 28.

[4]       Ragnhild Bjerre Finnestad, Image of the World and Symbol of the Creator: On the Cosmological and Iconological Values of the Temple of Edfu, Otto Harrassowitz Verlag, 1985, note 88, page 36.