Egyptian Map to the Underworld

The Book of Gates is a formidable challenge in many respects. I had a copy on my bookshelf for over forty years, and started reading it several times only to put it aside for want of context. That context was provided by The Lost Book of Enoch, which provided a surprisingly large number of geographical clues that suggested that the home of the gods – as visited by Enoch – was in the Andes Mountains. These clues are identified in Chapters I and II.  With that context, I began a search to validate these findings regarding Enoch’s travels – to determine if there were there other ancient texts that placed the home of the gods in the Andes. Turning to the mythology and legend of Egypt, the translations provided by Budge identified a number of geographical markers for the home of the gods, such as volcanic based hot springs, lava flows, a series of lakes, and the circle of voices, agricultural plots, cities, and the famous gates. It was after the third or fourth reading that I noticed elements of the hieroglyphs not included in his commentaries on translations. The reader should note that as the journey to the Underworld proceeds, the boat carrying the pharaoh is either floating with the current, sailing, being propelled by rowers, being portaged, or being towed. In places where there is towing, the hieroglyphs indicate a varying number of figures required to tow the boat, suggesting a varying level of difficulty at certain points of the journey. Also included is a visual of a portage, which identified a portion of the trip not succinctly identified as a “portage” by the textual commentary and translation. The reader should also note an almost miniscule detail that has been overlooked in all translations to date, which is the front end of the towrope in each of these pictorials. The tip of the towrope points in five varying directions (up slightly, up steeply, down slightly, down steeply, flat), which is taken as indicative of the slope of the towing. The detail provided is too rich and variable to be considered a random work of artists. With this information, I sought a route through the Andes that corresponded to the varying degrees and types of efforts. All of this detail pointed to a journey up the Amazon to its original source: Lake Titicaca. Crossing the lake, the pharaoh would find the home of the gods at Puma Punku at the southern end of the lake, and following the southern flow of the Desaguadero River, end his trip at the fields of Sekhet-Hetepet and Lake Poopó. This was the home of the gods in the heavens and in the clouds. If one travels towards the Amazon east of Titicaca, one reaches the ‘cloud forests’ of the Amazon along the mountains, which in an appropriate perspective, places Tihuanacu between the clouds of the forest and the sky.[1]

Chapter IV elaborates the details of the journey, and Exhibit III- shown below – is only meant to show the Book of the Dead imagery.  The trip is best followed by tracing the route on ‘Google Earth’, which allows the reader to assess the terrain in detail.

“He floateth down the river, he saileth up into SEKHET-AARU, 2 he reacheth SEKHET-HETEP” …. Aaru was envisaged as a series of islands, covered in “fields of rushes” (Sekhet Aaru) “He hath established for me a house in the high place of the lands, and there are wheat and barley therein” Journey starts with floating down the Nile to the Mediterranean, then sailing. Islands of rushes are in Lake Titicaca. The barley referred to is actually quinoa from South America. [2]   Tuat is also defined as Upper and Lower Regions, suggesting North-South orientation, as in the Valley of the Gods in Peru.

THE ANTE-CHAMBER OF THE TUAT IN THE FIRST DIVISION of the “Book of Gates of the Tuat,” according to the sarcophagus of Seti I., we see the horizon of the west, or the mountain of the west, divided into two parts, and the boat of the sun is supposed to sail between them, and to enter by this passage into the Tuat.”  The ante-chamber is the Amazon basin. Pass at west end of Amazon between Northern Andes of Columbia and Central Andes. An ocean liner can reach Iquitos, Peru via the Amazon

Post portage connects to a feeder river to the Urubamba, resulting in a downstream tow. Even the towers arms are holding the rope differently than before, to show a different type of effort required. Towards the end of this leg “Here is the lake…the water of this lake is boiling hot…they smell the foetid smell.”  Being towed downstream, passing underneath Machu Picchu, arriving at volcanic hot springs at Agua Calientes, Peru (13o09’17.99S, 72o31’32.13W).

The monster serpent which stands on his tail and guards the gateway is called TEKA-HRA. The gateway is called NEBT-AHAU.   There is local Peruvian mythology referring to the old name of the land- Ameru-ca[5] – which was named for the Land of the Serpent. [6]

Many men towing, steep upstream as noted by end of two rope.

GATE OF SET-EM-MA’AT-F (Fields of Eden)

Fields of Eden are equated with the marshes with reeds and the vicinity, now at the northern side of the Lake Titicaca basin of old, or possibly the sediment filled river valley south of Ollantaytambo.

GATE OF AKHA-EN-MA’AT, “water of the pool is of fire”

Gate of Set-hra.  The monster serpent, which stands on his tail and guards the door, is called SET-HRA, in the Lake of SERSER (i.e., blazing fire); Whosoever knoweth how to use words of power [against] this serpent shall be as one who doth not enter upon his fiery path.”

The corridor is swept by flames of fire, which proceed from the mouths of two uraei -two vents of Quimsachata.

Here is where they are towed past the serpents SHEMTI, BATA, TEPI, and use words of power to protect the traveler. Here is where the traveler reaches the northern tip of the Lake and is towed along an ancient corridor, now submerged. See Figure 57 for Seth like figure-heads, suggesting towers from the region ruled by Seth of the Underworld. The number of tow-men is increased, possibly due to the “wet” muddy waters, created by volcanic ash.

GATE OF SETHU (confronting many serpents Sethu, Semi, Uamemti) The Twelve Akhemu-Seku Gods with their Paddles: “1. Twelve male beings, each of whom carries a paddle; they are called “gods who never diminish.”

Twelve female beings, each of whom grasps a rope with both hands; above the head of each is a star. They are called the “hours who tow alone, [the boat of Ra].”

The god who is in this picture setteth the stars in their places, and he goeth on his way with the great god.” Here the traveler is guided by the stars across the lake, as large as a sea. [7] The journey across the lake is paddled by 12 men.

“This [great] god cometh forth to this gate, this great god entereth through it, and the gods who are therein acclaim the great god….The gods who bring Disks and Stars for Ra…. It is they who guide and transport those who are in the boat of this great god.”  This gate appears to be an acknowledgement of acceptance by the ‘old gods’ of the Edfu Text. 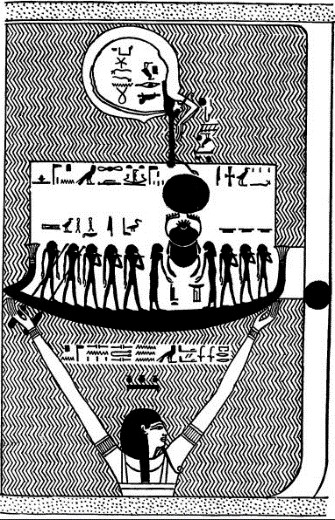 THE GATE OF SEBI AND RERI. “the gateway TESERT-BAIU, which is the last that he will have to pass through before emerging in heaven in the light of a new day.” (page 302) Here we see that the end of the Tuat is reached, and the boat of the sun has reached that portion of it through which he is about to emerge in the waters of Nu, and thence in the form of a disk in the sky of this world.

[2]       The Egyptian Heaven and Hell (Three Volumes in One: The Book of the Am-Tuat; The Book of Gates; And the Egyptian Heaven and Hell (Google eBook), E. A. Wallis Budge, p31. Here-in, Budge translates a view in which Sekhet-Aaru “It’s walls are of iron.  The wheat here is 5 cubits high, the barley is seven cubits high, and the Spirits who reap them are nine cubits high.” This makes the farmers giants at 13.3 feet/4 meter and the barley at 7.4 feet/2.26 meters. Barley has never been known to grow to that height, but quinoa, very similar to barley does, and quinoa is known only in South America.  The reference to giants populating the underworld is useful in that Enoch mentions often the giants in the area.

[4]       Locating a portage any further south from the Apurimac River to the Ene would result in a substantially longer portage, in the realm of 30 miles.

[5]       From http://www.labyrinthina.com/amaru.htm , “Peruvian prophecy states that all the Americas were once united by a common spiritual tradition and leader, and that they will be again. We were anciently united as Amaru-ca or Ameru-ca, Ameri-ca, meaning the “Land of the Serpent”, during a time when the serpent was the universal symbol of mystical wisdom and spiritual power. One legend states that North and South America were named after a culture bearer known historically as Aramu Muru or A maru (serpent/wisdom) the “Serpent (wisdom master) Meru,” with connections to the mythical Mount Meru, abode of the Demi-Gods.” Copyright © KathyDoore.com Labyrinthina.com Markawasi.com. All rights reserved

[6]       “giant snake scientists discovered in a coal mine in Columbia, South America in 2008. Fossils of an enormous snake were discovered in an open coal mine in the Amazon rainforest. Paleontologists estimated the length of the snake – called Titanoboa – to be 43 feet long and estimated to weigh 2,500 pounds!” http://www.extremescience.com/biggest-snake.htm

[7]       “Take ye your paddles and unite ye yourselves to your stars. Your coming into being taketh place when [I] come into being, and your births take place when my births take place. O ye beings who transport me, ye shall not suffer diminution, O ye gods AKHEMU SEKU.'” Of the twelve goddesses of the hours it is said: “Those who are in this scene take hold of the rope of the boat of Ra to tow him along into the sky. It is they who tow Ra along, and guide him along the roads into the sky, and behold, they are the goddesses who draw along the great god in the Tuat. Ra saith” page 277, Book of Gates.